Public infrastructure in communities throughout Alaska are facing threats imposed by erosion, flooding, and permafrost thaw. In many instances, the impacts of erosion, flooding, and permafrost thaw amplify one another to form a combined threat known as usteq. A  lack of long-term spatially or temporally discrete monitoring throughout Alaska challenges the ability of engineers, scientists, and planners to study and address the level of threat from erosion, flooding, thawing permafrost, and usteq. For many Alaska communities, the only information available to determine potential damage from these threats is found in historic records and disaster declarations or determined from anecdotal information or physical evidence.

The purpose of this study is to help identify communities that may be facing such threats based upon existing data, and to recommend further data collection efforts intended to provide information necessary for responding to the threats.

The goals were to:

The study was carried out by three entities working closely with the Denali Commission:

The US Army Corps of Engineers Alaska District (USACE) was responsible for evaluating threats from flooding and erosion. However, new work carried out by the Corps focused primarily upon flooding, because erosion was considered extensively in the Baseline Erosion Assessment (USACE 2009).

The University of Alaska Fairbanks Institute of Northern Engineering (UAF) and the USACE Cold Regions Research Laboratory (CRREL) were responsible for evaluating the risk from thawing permafrost, as well as integrating the combined threats from erosion, flooding, and permafrost thaw into an overall measure of usteq.

Data collection focused entirely on publicly available data and those data volunteered by agencies or the private sector. No communities were visited, nor was any effort made to validate the data beyond a review of the data by the study team for consistency and reasonableness. It is recognized that the amount and reliability of the data varies among the communities.

The groupings and rankings developed under this study are intended to be used to identify those communities requiring additional investigation. However, the threat levels alone are insufficient to determine an appropriate course of action in any given community. It is intended that decision makers will utilize the estimated threat levels presented combined with other data, and a substantial amount of professional judgement, to allocate resources necessary to conduct follow-on investigations in individual communities. 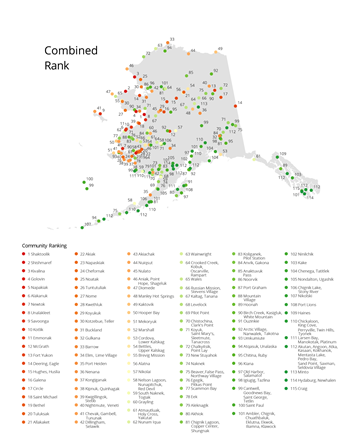 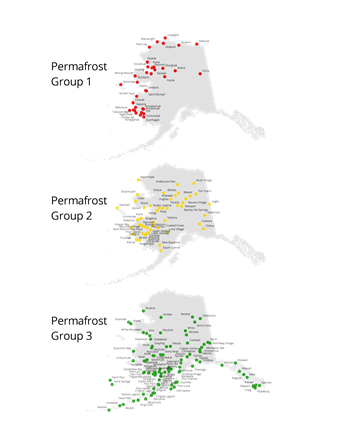 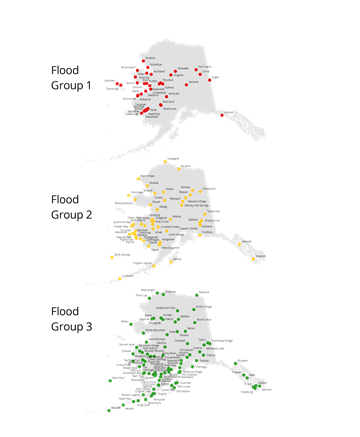 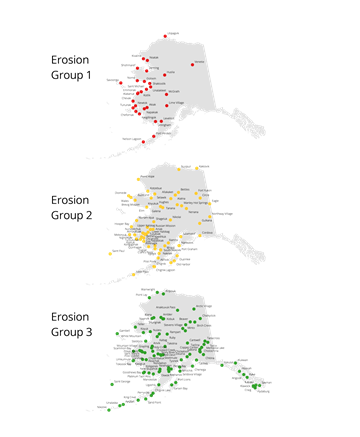 A more detailed database of geospatial information collected during this study will be made available for public download from the UAF Scenarios Network for Alaska + Arctic Planning (SNAP) database Arctic Data Collaborative.

The database was created to catalog information used to assess erosion, flood and permafrost hazards and to present the results of the process. It was originally developed as the Alaska Hydrologic Hazard Database and included georeferenced data on riverine (rainfall, break-up/ice-jam, glacial outburst) and coastal flooding (storm surge and wave) events for communities in the State of Alaska. The project added additional data on permafrost including community-specific information on massive ice, thaw susceptibility and permafrost occurrence and temperature. Intermediate results for each hazard for flooding, erosion and permafrost that relate categories including commercial infrastructure and housing distribution were added. Final rankings for each community for both individual hazards, a time factor and a combined score were also included. This database summarizes the main data used to derive each individual score for each hazard, as well as provides an appropriate spatial framework for more detailed analysis.