The “Mobility of Unfrozen Water in Frozen Soil” project is funded by the National Science Foundation CAREER program under Award No. CMMI-1147806.

Frozen soil is ubiquitous, as more than half of the soil on the North American continent freezes every winter and 24% remains frozen throughout the year in the form of permafrost. A key element for understanding soil freezing and thawing processes is the ability to predict mass fraction and mobility of unfrozen water – water that remains liquid at below-freezing temperatures – within frozen soils. Unfrozen water plays a critical role in the thermal regime of permafrost, and high unfrozen water content results in weakening of frozen soil, which affects foundation design and slope stability. Because of its temperature dependency, understanding how unfrozen water in permafrost behaves becomes increasingly urgent in a warming climate.

In order to increase our understand of unfrozen water and to train the next generation of engineers and scientists, the major goals of this project were 1) to quantify relationships among hypothesized key variables in soil freezing and thawing processes, namely unfrozen water content and mobility, soil zeta potential, and soil micro-fabric; and 2) to involve undergraduate students from the Alaska Native Science and Engineering Program (ANSEP) in this CAREER research, and to conduct K-8 outreach through a hands-on geotechnical engineering module delivered to middle school-aged students.

We determined that the traditional method of determining unfrozen water content in frozen soils using a pulse nuclear magnetic resonance (P-NMR) device may overestimate the amount of unfrozen water. The improved NMR methodology yields unfrozen water contents that are three times lower in magnitude than the traditional method. This significant change in measured unfrozen water content has large potential impacts in thermal modeling and in calculating creep of frozen soils. This portion of the research also produced a suite of unfrozen water measurements for five standard clays, each saturated with four different adsorbed cations, providing a foundation for future work with clay-bearing soils. We measured sub-freezing zeta potential values, which to the best of our knowledge, is the first time this has been accomplished. Zeta potential is a parameter related to the surface charge of a mineral suspended in fluid. The sub-freezing values follow the trends established at above-freezing temperatures, becoming less negative with colder temperatures. Less negative zeta potential values allow soil particles to aggregate when in an aqueous environment, and produce soils with larger hydraulic conductivities. CT scanning results indicate that micro-lenses may be present in soils flash-frozen with liquid nitrogen, which is the first time that this has been observed.

This project supported six undergraduate research assistants (URAs) and two MS students (with five students from underrepresented groups), all of whom played a significant role in accomplishing the research goals. Through PI mentoring, most of the students presented their portion of the research at local, national, and international conferences, including the American Indian Science and Engineering Society 34th National Conference, the 2016 International Conference on Permafrost, and the 2017 Congress on Technical Advancement. During two years of the project, the PI taught a geotechnical engineering module to middle-school students that focused on frozen ground engineering, which included trips to the Permafrost Tunnel near Fairbanks, Alaska. This outreach activity was designed to make geotechnical and frozen ground engineering more tangible and understandable to 7th and 8th graders, providing them with another potential career path at an early age. Results also were disseminated through a graduate-level course on thermal modeling, peer-reviewed journal papers, and this project web page. 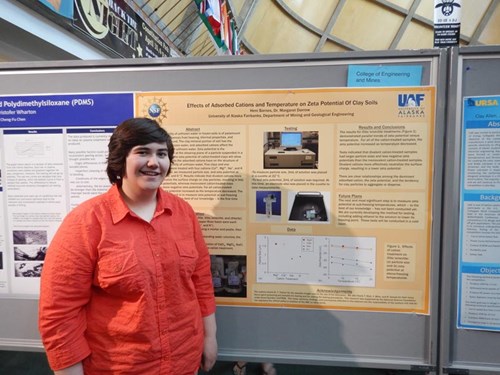 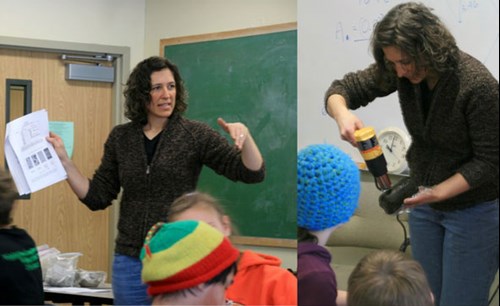 PI Margaret Darrow taught a geotechnical engineering module to 7th and 8th graders at the Watershed School in Fairbanks, Alaska. The outreach activity consisted of a laboratory activity followed by a tour of the US CRREL permafrost tunnel. The middle-school aged students were introduced to general concepts of frozen ground and geotechnical engineering, such as bearing capacity, soil classification, and thaw strain, gained hands-on experience identifying different types of soil and how each responds to being frozen, and saw ice wedges and ice-rich soil in the 3D environment of the permafrost tunnel.