To evaluate the potential for environmentally responsible development of unconventional natural gas from seeps near the remote Alaskan village of Atqasuk for local space heating and power generation. Research priorities include identifying and evaluating the quantity, quality, and location of natural seeps, as well as determining potential capture and transport mechanisms necessary for future resource development. 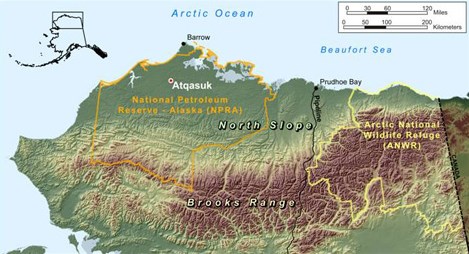 Methane (CH4) in natural gas is a major energy source in the U.S., and is used extensively on Alaska’s North Slope, including the oilfields in Prudhoe Bay, the community of Barrow, and the National Petroleum Reserve, Alaska (NPRA). Smaller villages, however, are dependent on imported diesel fuel for both power and heating, resulting in some of the highest energy costs in the U.S. and crippling local economies. Numerous CH4 gas seeps have been observed on wetlands near Atqasuk, Alaska, (in the NPRA) and initial measurements have indicated very high flow rates. Gas samples collected in 1996 indicated biogenic origin, although more recent sampling indicated a mixture of biogenic and thermogenic gas. This study will:

Potential benefits of the project are:

Recent work revealed that seeps may contribute as much as 50-70 million tones of atmospheric CH4 per year, or ~10% of global sources. Additionally, capture and use of CH4 from seeps mitigates global climate change in two ways: Combusting CH4, a potent greenhouse gas (CH4 is 25 times stronger than CO2 on a per molecule basis), converts it to the weaker greenhouse gases, CO2 and H2O; and use of local CH4 reduces energy consumption associated with diesel usage and shipping to remote villages. 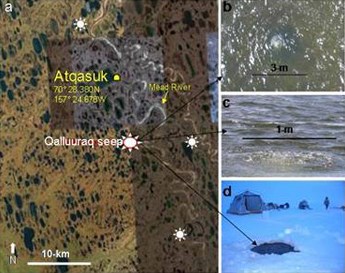 These seeps are of interest as an energy source given preliminary measurements of high flow rates and CH4 concentration.